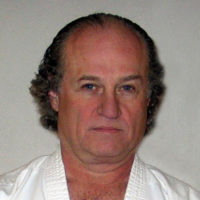 In 1967, my journey began in the martial arts, Shotokan Karate, at Santa Monica Dojo on 20th St. near Olympic Ave. in the city of Santa Monica. I was 19 years old at the time and traveled some 20 miles one way from the San Fernando Valley, my home base. Under the watchful eye of France Borka, George Gamble, Lee Muhl, Bruce Kanegai, Jeff Klein and Brian Maeda I practiced at least 3 times a week. Practice was hard, relentless – we were taught to persevere and we created a foundation of future growth. By 1970, I was a Shodan, one of Mr. Ohshima’s first 100 black belts.

In 1971, together with Bruce Kanegai, the CSUN Shotokan Karate was founded. Shortly thereafter, Bruce was awarded an art scholarship and made the long journey to France for one year. When he came back, he started the Simi Valley Club and Dojo, not too far from the San Fernando Valley.

In the mid-1970’s, for 2 ½ years, I served as General Manager of the SKA. Yes, in every era we get more organized and efficient. In 1996, I was asked to write and produce a video documentary about Mr. Ohshima (Mr. Ohshima and the SKA: 40 Years In America). This video fell between Harmony and the Shotokan Ohshima Dojo Grand Opening 2000 presentation. In 1998, I was asked to become a member of our Board of Directors. Raising funds by way of outside businesses, corporations and motivated individuals became my pursuit – each member chooses a specialty! In 2002, in Spain, I was promoted to the rank of Godan (5th degree black belt).

Grey Kaufman is Valley Dojo Manager. Please contact Grey at 818-676-0116 with any issues or questions.